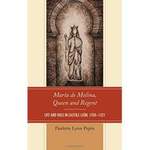 find in a library

This biography of Queen María de Molina thematically explores her life and demonstrates her collective exercise of power and authority as queen. Throughout her public life, María de Molina’s resilient determination, as queen and later as regent, enabled her to not only work tirelessly to establish an effective governing partnership with her husband King Sancho IV, which never occurred, but also to establish the legitimacy of her children and their heirs and their right to rule. Such legitimacy enabled Queen María de Molina’s son and grandson, under her tutelage, to fend off other monarchs and belligerent nobles. The author demonstrates the queen’s ability to govern the Kingdom of Castile-León as a partner with her husband King Sancho IV, a partnership that can be described as an official union. A major theme of this study is María de Molina’s role as dowager queen and regent as she continued to exercise her queenly power and authority to protect the throne of her son Fernando IV and, later, of her grandson Alfonso XI, and to provide peace and stability for the Kingdom of Castile-León.